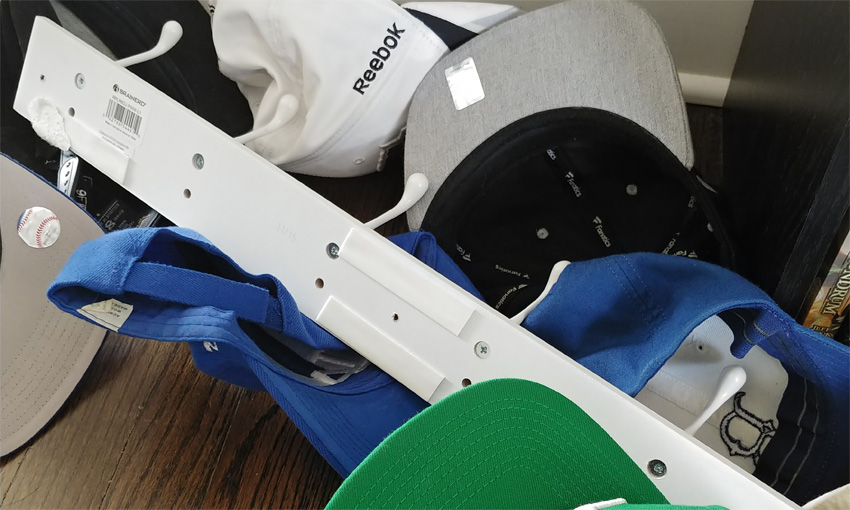 Photo: Note the white lines still attached to the back of the hat rack. More on that later…

In an effort to preserve the integrity of our walls, my wife and I made an unofficial pact of sorts when we first moved in to attempt, when feasible, the use of mounting tape over conventional nails or screws. Despite our best intentions, the tape has done more damage than we could have ever imagined.

It’s funny, but you go into a situation with mounting tape thinking, “At least it’s not going to ruin the wall” as you press with all your strength to force it to remain in place. And then, as you slowly remove your hands from the picture/frame/painting/etc., you breathe a sigh of relief as the gravity-defying adhesive works its magic.

I’m a light enough sleeper as it is. But whenever I wake up to a sound like that, I find myself playing a mental game of, “If it’s anything, I hope it’s the least expensive thing.”

Recently I reorganized my office area for the first time since moving in three years ago. I wouldn’t go so far as to say I Marie Kondo’d the entire room, but I definitely ditched a ton of unnecessary items to the curb, moved around some furniture, and hung up a few IKEA frames. And by “hung up” I mean, “Applied roughly one foot of mounting tape to the back of.”

Well, the very next morning I went into my office before heading off to the gym and I was surprised – especially given my track record – to see everything still gripping to the wall.

Unfortunately that was not the case less than one hour later when I returned home.

My newly mounted hat rack, cork board, dry erase board, painting, and one picture frame were scattered around the edges of the room. Worst of all, a number of these items hit the base molding on the way down and took out a few chunks of it in the process. Others, like my hat rack, managed to rip off a spot of paint, too. Some of them left behind a few pieces of tape, remnants of what could have been if only the tape did what it actually said it would do.

How does something mounted so well to the paint manage to rip off the paint but NOT stay on the wall?

Mind you, we didn’t cut corners in our paint selection either. And I followed all of the instructions that come with the tape: wash down the surface, allow it to dry, press firmly for 30 seconds, etc. It didn’t matter. There were structural casualties.

So, in my attempts to spare the walls of nails, I turned around the very next day and (yup) nailed these items back up on the wall. Now these tiny little holes I fretted over pale in comparison to the chipped base molding, missing chunks of paint, and broken picture frames I received as a result of trying to take the more conservative approach.

I wanted to end this rant with a moral of sorts, but I can’t think of one that sticks.

How about this: When it comes to hanging items up on the wall, don’t reinvent the nail. Just grab a hammer and call it a day.

Your walls will thank you.